The little white doo-dah that changed my (working) life

Back in September I started what felt like an unlikely experiment. Through work for a client I had the opportunity to try out using an iPad Pro and Apple Pencil to see if I could switch from being an inveterate paper notebook user to working completely paper free.

For many years now I’ve not printed anything. The only time the printer at home gets used is for kids’ homework tasks. I’ve probably printed more in the last five years of running my business using professional printers Moo that I have on an inkjet or laser. But the notebook was the last bastion and it felt somewhat anachronistic, especially as I was talking to clients about transforming “digitally”.

I had experimented with tablet devices for many years. I was a Palm Pilot user from the very early days, then Windows Mobile tablet user with HP Jornadas, which migrated into early Nokia smart phones (they were smart, just not touch screen). But the experience of stylus on screen was always lacking. Always inferior. Always laggy.

I tried Windows tablets before Windows 8 and they were crappy. I tried early Surface tablets and they weren’t much better. But of course it wasn’t just the hardware I needed. Software for “writing” was obsessed with structure and indexing and making the data I wrote searchable and accessible, and that missed the point of why I used a pen and paper. Writing and scribbling was an act of learning. Taking notes in a meeting helped me to learn. Drawing diagrams in meetings helped me to explain ideas and concepts. It wasn’t data, it was of the moment.

Tools like Evernote and OneNote wanted to enforce a logical order to things where there was none. I wasn’t looking to exploit data, I wanted something that would take me beyond the constraints of paper (creatively, but not “artistically” as you’ll hear if you checkout the forthcoming Drawpod podcast I’m doing with Natalia Talkowska).

The iPad experience was the first time that I used something that had the sensual fidelity of pen and paper. Not the same – Pencil runs more smoothly over a tablet screen than pen runs over the paper – but with touch sensitivity there is an expressiveness to using it that I hadn’t realised I needed. Push harder, the ink flows thicker.

Since the early experiments I’ve tried lots of different apps, but have now centred around three, for the most part. The main tool I use is GoodNotes. It’s a notebook app. It doesn’t have lots of structure (books and pages is all you get). You can turn handwriting into text, but I never do. It enables me to take notes, quickly share them out again with people as image or PDF, and create more complex diagrams and sheets (like the one below). 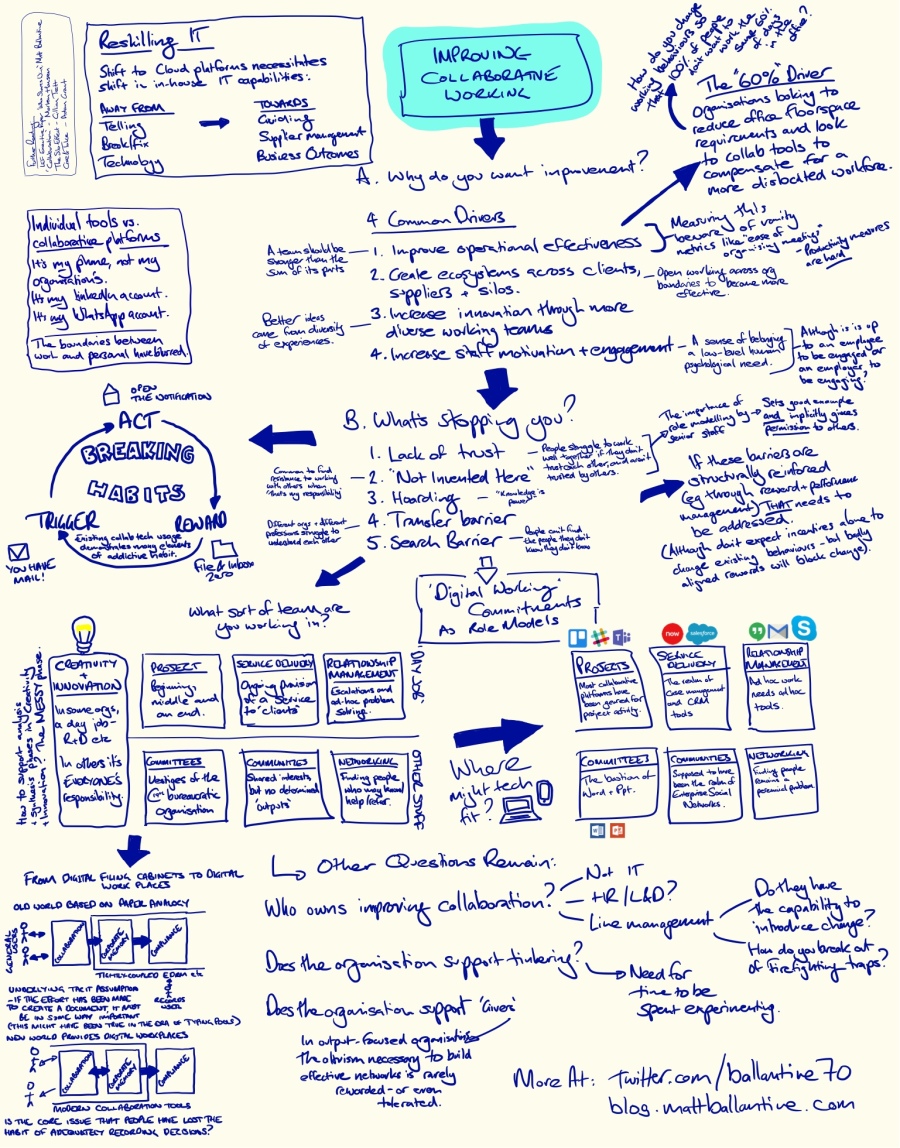 There’s something about hand written and drawn that permits a good feel of permanent work in progress. It feels human. Thought, but not ever necessarily finished. Finished is overrated in lots of the work I do.

The next tool is Sketchbook. This is an artist’s tool that is way more featured and complicated that I will ever need, but it’s great fun to make pictures that I’d never create in the physical world.

And finally there is Cardflow+, which is loosely index cards on a massive table. That is something I’m just starting to experiment with.

Google G Suite and Microsoft Office 365 apps are all on there, so I can access all of the information that I need whether clients are on one platform or another. Oh, and I can use it to DJ (DJay Pro App + a Panasonic WeGo4) and also to make music (Korg Gadget + Bluetooth NanoKey Studio controller

Alongside note taking, I run workshops with GoodNotes. I connect to a screen (via a screen mirroring app on my PC Mirroring360.

It’s then possible to have “slides”, annotate on them, take photos during a session and bung them into the notebook, draw on those, and then at the end of the session immediately send a record of the whole thing as a pdf to all the participants.

There are still gaps in all of this. I’ve yet to find a drawing app that isn’t still somewhat constrained by the analogies of the physical world. I still crave an infinitely zooming canvas coupled with decent drawing tools (there are a few on the market, but they’re all a bit buggy). The way you charge a Pencil by sticking it into the bottom of the iPad is ludicrous and an accident waiting to happen. And there is nowhere to store the thing alongside the iPad, which is also a pain (I don’t mind losing a £2 Pentel Poster Pen, but a £100 Apple Pencil…)

Without doubt all of this has had a bigger impact on my day-to-day working life than any other tech thing in many years, possibly ever. That has come as something of a surprise. I still use a PC, I still use a phone. But the iPad is more useful than the two of them put together.