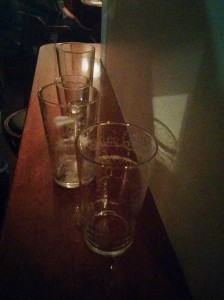 In the year and a half in which I have been building my business, I’ve had many great plans that have resulted in nothing (or, at least, nothing yet). In the same period my most successful and profitable client relationships have emerged seemingly by chance. A random referral, an email out of the blue, a casual conversation.

Yet of course I’ve been engineering those chances – networking my little bottom off in coffee shops and meeting rooms the length and breadth of London and beyond. But when trying to explain many of my actions to my main shareholder (Mrs B) it’s hard. I’m doing many of the things I do because I instinctively know that doing enough of it will generate work. This is what the department store magnate John Wanamaker was describing when he said that “Half the money I spend on advertising is wasted. The trouble is I don’t know which half.”

The rational, deterministic approach to such problems is to try to convert something necessarily chaotic and complex like networking into something ordered and structured like, I don’t know, a Google Adwords campaign. I prefer to think about how I can engineer as much opportunity for serendipity as I can.

It’s in that context that yesterday I organised a Work Unbound event at my current client’s offices. Work Unbound in short is basically inviting a bunch of people to come and hot desk in an office in which they wouldn’t usually work together. With the technology we have available today we are no longer geographically tied to a particular workplace. Work Unbound tries to mix it up a bit.

I’d invited people from across the broader client organisation, all of whom had some sort of interest in collaborative technologies (and with whom we’ve been working in recent months). First thing in the morning I had a sense of trepidation: not only was I concerned whether anyone would actually turn up, but I was also conscious that to keep the thing vaguely “under the radar” (read: “anyone telling me not to do it”) I hadn’t told that many people it was happening. It’s only when you ship in a bunch of strangers that you realise quite how tied people become to “their” desks in a hot desking office.

The half-dozen people that we had invited all turned up, and got on with their days’ work. We had brief introductions at the start of the morning, and then just worked. There were conversations on occasion, but it didn’t feel particularly out of the ordinary. I guess more so for me as I was in an office in which I felt familiar.

We all popped out for lunch together, and that bonded the “team” and stretched the conversation a little more. and then it was back to the office for more work. Four of us ended up in the pub at the end of the day, and the conversations continued.

Was it a good thing to do? Well, yes. But I can’t quite tell you why. I feel I know some of the people I’ve been working with a bit better, especially because the day wasn’t structured around meetings or workshops which tend to force certain types of relationships or behaviours. That there wasn’t any structure was something that as host made me slightly anxious (were the others expecting me to be doing something more actively?).

But overall, well, I reckon it did something to engineer a bit more serendipity for the people involved. And that will be a good thing, even if at this stage I can’t really tell you why.