I spent a great couple of hours in the company of Anne Marie McEwan yesterday in the inspiring setting of the Royal Festival Hall.

Our conversation covered many areas, but one thing that sprung up was why issues of improving the world of work should be of particular importance to employers at this point in time. We both believe that the world of work should be more human, and both know that this argument often falls on deaf ears when you are dealing with technocrats. But there is something about now that means that “softer” approaches to changing workplaces is particularly pertinent. Employers are having to compete to employ people in ways that they never have before.

One of my favourite management school models is one created by Michael Porter (reportedly the best paid management speaker in the world at the moment, it seems). His Five Forces model  is a great way to explain and explore competitive pressures, and I’ve used it quite a bit in the past to explain the existential threat under which CIOs currently find themselves. It struck me in my chat with Anne that it could also be a good way to explore the pressures that employers now find themselves in finding and retaining people to work for them (I’ve stopped using the word “Talent” as it sucks). 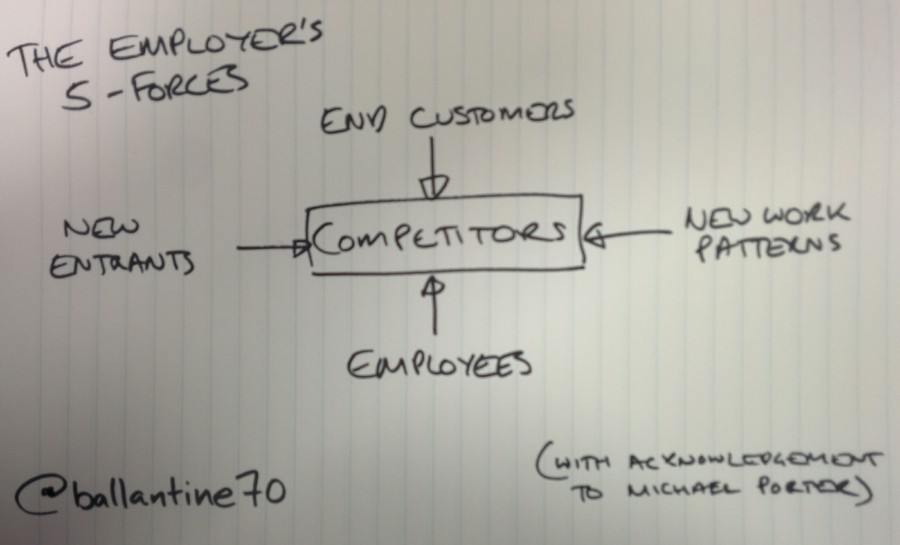 If you are an employer, you have traditionally had competitors in attracting and retaining people to work for you from other companies. These will be either those in your same sector, those in your same geography, or a combination of both. Despite this being well established, I wonder how many people recruiting have ever sat down and asked “Why are we a better place for someone to work that Company X, Y or Z?”.

The end customers of your company’s products or services place pressure on you ability to employ because, generally, they’ll want you to supply them on a cheaper, quicker, higher quality basis. If employment costs are a significant proportion of your overall costs, that obviously reflects greatly on your ability to employ people.

Your existing employees are also exerting pressure on your ability to employ. In general they are looking for rewarding, enjoyable work that pays a fair rate and offers some level of security. They are also potentially looking for greater flexibility these days too, and often there will be regulatory drivers underpinning those desires.

Where things now get really interesting is in terms of changing patterns of working that are inter-related. New work patterns, whether through freelancing, sole trading, portfolio careers and increasing demands for flexibility in terms of location and time are increasingly available to people; technology in particular has made work increasingly about what you do, not where and when you do it.

The final pressure on employment is in terms of the new world of startups. The costs to starting up a business have been dramatically lowered in recent years, so new entrants into the employer market and many and varied. That an individual can more feasibly go down this route for themselves further complicates things for existing established employers.

All of this combined means that there is potentially more competition for employment and employers than most employers have been used to. It’s also in the context where the social contract that existed for many years of an employee trading a level of freedom for a level of security has been broken, but traditional employers are maybe slower to react to that fact than particularly those with in-demand skills.

Companies are waking up to all of this – movements around employee engagement and employer branding are both reactions. But they feel reactive rather than a more holistic strategy, short term plasters rather than coherent plans. Maybe the Employer 5 Forces might give a bedrock of analysis on which more coherent approaches could be delivered?