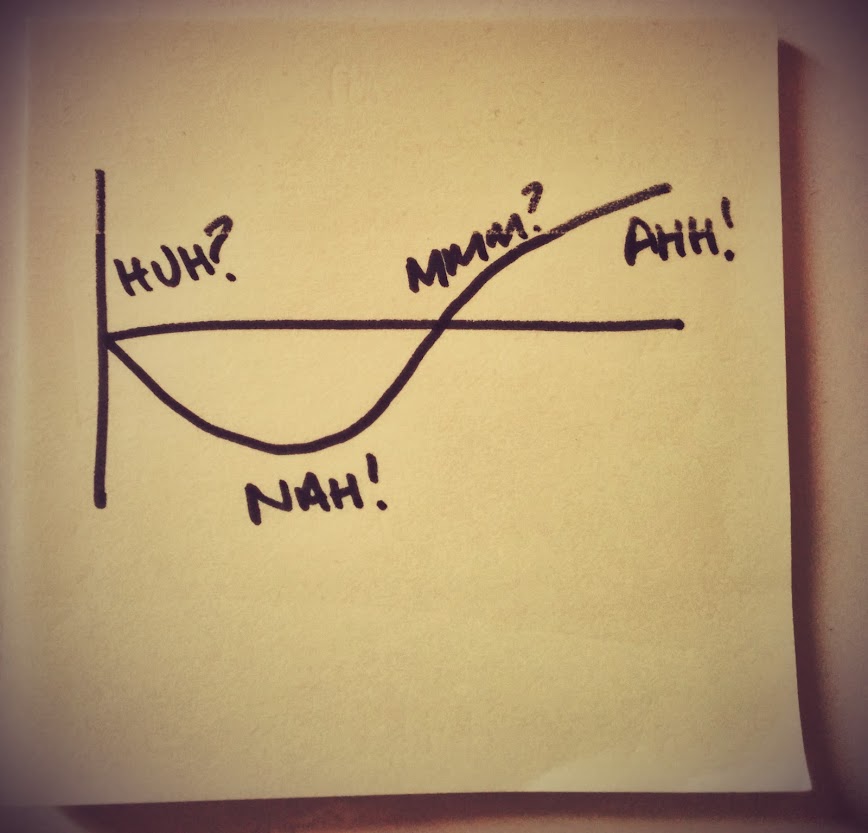 In the summer I’ve been invited to take part in the Spark the Change conference being organised by Dan Rough and the team at Gamevy, an interesting software company that produces games, and is organised on non-management principles. Dan’s one of the folk who follows this blog, and an article I wrote a few months back about people-led change inspired him to ask me to speak.

Seeing as how I like to make my event appearances bespoke bits of whimsy, I’ve started thinking about a new model to describe the ways in which we, as emotional creatures, react to changes that are imposed upon us, or those that we choose to undertake under our own volition. Here then is the world premiere of the Huh? Nah! Mmm? Ahh! cycle of technology change adoption. Underlying principles may well have been shamelessly stolen from far more reputable sources (particularly Elisabeth Kübler-Ross’ work), but the application hopefully takes it out of the theory book and into the nearest branch of Currys/PC World.

When we are confronted with something new, we tend to go through a series of emotional responses. Those responses might pass in the flick of an eyelid – they might take years. We may bounce from one response to another, and we may (over time) start to go backwards again.

The first stage is the Huh? stage. The “I don’t know what it is” phase. A bit like the phase that my three-year-old son is currently going through where he thinks that if he covers his eyes, other people can’t see him. The Denial phase. The “if I don’t acknowledge its existence it won’t be there” stage. You get the idea…

When I find out about a new technology, I have realised that I’m pretty judgemental and get through this stage pretty quickly – but let’s take for example “beacons”. Some sort of tech that allows your smart device to know where it is in a place where GPS doesn’t work – a metal-roofed shopping centre, perhaps. Beacons are things that I have heard of, but I don’t really know very much about. I’m at the Huh? stage.

As soon as I find out about something like beacons in a bit more detail, I’ll get to the Nah! stage; I’m confronted with something that upsets my world view of how things are, so the easiest cognitive response is to dismiss it – to resist the idea. At the Nah? stage I have recognised that the thing exists, and I’m choosing to refute its importance. I’m very much at this stage with the concept of The Singularity. I’m just coming out of it in relation to the ideas behind Crypto-currencies like Bitcoin (although I’m very much in it regarding Bitcoin itself…)

Now of course, given my background and experience, I could be right in my assessment. But it’s my gut speaking here, not my logical brain (necessarily), even though I could then reverse-engineer a bunch of logical reasons to support my intuitive response.

From Nah? we move into Mmm? Piqued by either something I read, or something I see, or personal experience or just bowing to the pressure of the inevitable, the Mmm? phase is where I am able to start to process how I or others might apply the technology to some sort of end that is either useful, creative or fun. Whilst I haven’t yet fully commited my life to The Internet of Things, personal experience a year ago gave me first hand experience of how it might be useful, and I’ve been looking for Internet-connected radiator thermostats ever since…

But it’s not enough to merely think about things. The Ahh! phase is where one starts to fully adopt the change and it becomes embedded into my life. This happened five years ago for me with the idea of subscription music services (when I first started paying for Spotify and stopped buying music). At a similar point I bought into and adopted the idea of Cloud-based collaboration tools like Google Apps, DropBox and so on.

Aligned to adopting something new, there might be the need for things to go the other way. My adoption of Cloud tools has meant over recent years I’ve become increasingly questioning of the value of traditional collaboration software suites like Microsoft and Open Office. I also really don’t like the idea of files stored on devices these days – I get angst when I use standalone digital cameras because I know nothing is backed up until I’ve done something, unlike the camera on my phone which automatically copies photos in the background. My use of SMS these days, similarly, is now negligible, alongside printing and using CDs and DVDs.

Getting these adoption/unadoption patterns to synchronize is one of the biggest challenges in getting others to change. It’s all very well getting people to explore the new, but if they don’t let go of the old then they’ll never properly commit to them. That often then leads to a period of anxiety where the new is harder to do than the old, and reversion to old habits is the easiest path. Step forward the QWERTY keyboard if you want a great example.

It’s also important to bear in mind that much of this is emotional, gut, “fast” thinking. So lots of logic to support why things might be better runs the risk of just throwing up lots of counter arguments.