The BBC2 Series Dragons’ Den is a guilty pleasure. Ostensibly educational, it’s actually finely honed entertainment for those of us who would rather not admit to liking reality TV. It’s not “reality” – it’s a pure fiction, and so it would be terribly unfair to hold it up to any sort of real world benchmark to see how it performs.

So that’s exactly what I’m about to do…

This morning on my Twitter stream I saw this breakdown of the VC investments in the US by industry sector: 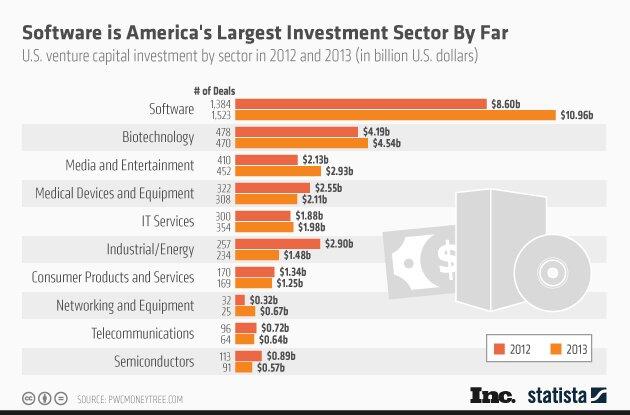 “Somebody should compare this to Dragons’ Den” I light heartedly tweeted. No one took the bait apart from me. So here we go:

What conclusions to draw? Well, as I said it’s totally unrealistic. It’s also comparing US investment against the UK. But my hunch is that the whole show is editorially focused on products that the audience can get their heads around.

Which is fine – except if it is influencing the minds of potential entrepreneurs of the future (and there isn’t much else on TV in the subject area apart from the equally guilty pleasure and consumer-centric The Apprentice. We do need to guard against the idea that the only things that get investment are consumer products and services. Because that’s a long way from reality.