The Start-up of You – Review 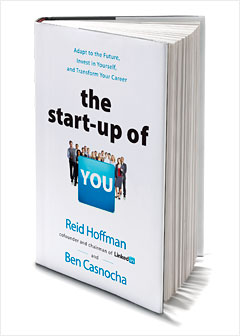 I’ve recently completed Reid Hoffman and Ben Casnocha’s book about careers in the 21st Century, The Start-up of You. It’s an interesting read – part practical guide to networking, part sage-like advice on the future of work and jobs and careers, and part LinkedIn user manual.

That last bit can grate a bit at times, but overall the central premise for Hoffman and Casnocha’s approach is that in the 21st Century, the old world of guaranteed career paths and jobs (or careers) for life is over. In this new world, we should all become a lot more entrepreneurial in how we approach managing our working lives, and think about ourselves. As such, the authors talk about the necessity to have a Plan A, a Plan B and a Plan Z: Plan A is what you do next as a logical short-step extension from where you are now; Plan B is the “pivot” (to use start-up language); and Plan Z is what you have as an emergency backup plan in case all goes wrong.

In this world, networking becomes essential; our working lives, if devoid of the structured career plans of old, become about spotting Plan A and Plan B through our networks. That’s where the book sometimes gets a little too into a justification of the LinkedIn service (a service, I should say, I’m a paying subscriber to: I don’t need convincing of the site’s value).

The general approach chimed with me, in major part because it represents a number of steps in my career. On three occasions I’ve made Plan B moves: taking a couple of years working in a management and leadership development consultancy in the mid-2000s, stepping back into IT Management after that role, and then making the move to Microsoft a couple of years ago. One thing, though, that the book doesn’t really touch on is that much of the world of recruitment (from my experience) is thrown by non-traditional career paths as both the HR and recruiting business seem obsessed with placing round pegs in round holes (even if both peg and whole are incredibly wobbly in this day and age).

Hoffman and Casnocha do talk about how networks can get beyond the recruiter world, but particularly in risk-averse economic times (which could well be the “new normal”) it’s hard to bypass the HR function entirely. It’s maybe where the start-up metaphor breaks down a little, but overall it’s an interesting look at how we should think about our personal career trajectories in these disrupted times.

2 thoughts on “The Start-up of You – Review”