Innovation in 4 diagrams – 4. The Skills of the Bricoleur

Now we have established that there are different approaches required for doing things where we don’t know the solution, to those when we do, let’s now unpack that skill set. Let’s look at the Skills of the Bricoleur. 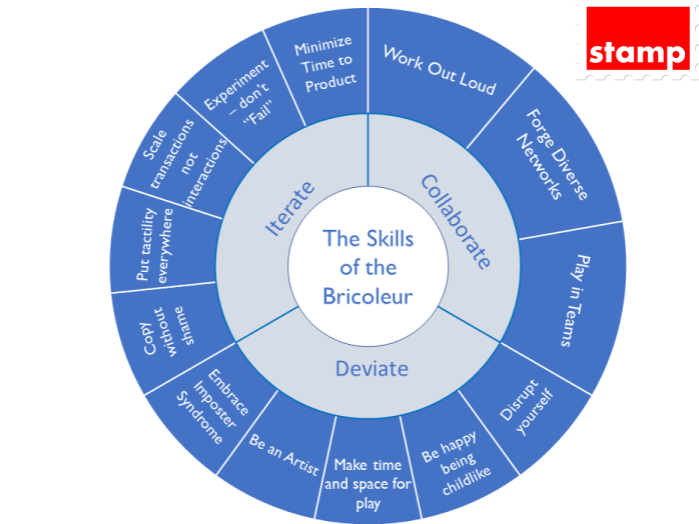 First of all there is a collective mindset required, that which wants to Collaborate.

Working Out Loud is a crucial part of this; not showboating or rampant self-publicity, but honest commentary on the work a team is doing so that a broader audience can observe and take part. Hey, that’s what I’m doing here kids.

Forging Diverse Networks is also vital. Problems that aren’t solved won’t generally be solved quickly or effectively by asking experts who haven’t solved it. You need to speak to people from different backgrounds, professions and organisations. You need to learn to leverage diversity rather than merely seeing it as a series of quotas to be hit.

Playing in Teams is also required. Understanding the different teams in which we work, and the different needs when Tinkering, Adapting or Planning. In matrixed-managed businesses today it can often be a challenge to even understand the teams of which we are members, let alone how they should operate.

Secondly there is an individual mindset that wants to (or at least is happy to) Deviate.

Embracing Imposter Syndrome is hard when organisations encourage expert specialisation. But if you are dealing with novel scenarios then you won’t know what will happen, so get over it.

Be an artist in acting as a mirror to reflect back to your organisation and your clients and customers the world they inhabit to help them reshape it.

Make time and space for play because otherwise you simply won’t do new things. Be more firefighter.

Be happy being childlike as playing is childlike. That can be remarkably uncomfortable in a work setting, but like imposter syndrome it’s something you need to deal with.

Disrupt yourself because if you want others to believe they can do things differently, you need to live that value yourself. When was the last time you did something differently?

Finally we have a series of approaches – Iterate.

Copy without shame. Great ideas are rarely completely novel – they often come from aping others (sometimes badly). Within the realm of IP law, copy to your heart’s content and don’t feel you’re not being innovative. You are standing on the shoulders of giants.

Put tactility everywhere. Turn ideas into things that people can touch and feel as quickly as possible. Make paper prototypes. Use cards. Build things in Lego. It changes how people can interact and iterate with those ideas in a positive way.

Scale transactions not interactions. Stuff that is about people interacting with one another doesn’t scale. Don’t try to. If the interaction part isn’t important, strip it out.

Experiment, don’t fail. “Fail” is far too loaded a term to be taken seriously. Reject the hype, and talk about experiments, proof and disproof.

And finally, Minimise time to product. Stop talking about things, stop analysing things. Start building them and iterating them as quickly as you possibly can. That’s the only way to find out if an idea is good or not.

So there you go. Innovation in four diagrams.

Is it a bullet-proof process for innovative success? No.

But no such thing exists, so don’t fall for it.

If you’d like to find out more then just drop me a line! There is a stack of services and workshops that I’ve got available that can help explore these approaches so that you can learn by doing.

2 thoughts on “Innovation in 4 diagrams – 4. The Skills of the Bricoleur”