After many years of increasing professionalism, and the rise of complex management frameworks, the world of business technology management is now in a stat of turmoil. Put simply: nobody really these days has the first clue on how you manage information technology in a big business.

It had got relatively clear. Technology was a cost to be managed, and a lever to reduce costs elsewhere in a business. Automate business processes to reduce their costs and increase their volume, and then make sure you keep on managing the IT costs so that they don’t outweigh the benefits. Well, that was the theory. In reality the only things that were measured with any reliability in the world of IT projects were cost, time and “quality”; the age-old golden pyramid of vanity metrics that recognised perhaps that outcomes were important and then resolutely looked the other way.

But then the Internet. And the smartphone. And social networks.

And so today we have a bunch of colliding changes that mean that nobody really knows what to do any more:

…as just a mere snapshot.

From a period of relative certainty in how to do things throughout the 2000s, the second wave of consumer internet has put the discipline of IT management into a state of chaos. On the one hand there is the clinging to old methods to support the ever-growing legacy of systems old, and on the other the agile, web and mobile focused needs of the new. But such bi-modal approaches cause pain and misery it seems. The world of IT is looking for its new “ITIL”, but in times of uncertainty you need adaptive teams with mixed sets of skills, not a proven framework to deal with certain situations.

Flicking through back copies of the Harvard Business Review (oh, living the middle-aged dream, me…) I found an article that I didn’t get around to reading first time around that explored a model for work styles that had been developed by Deloitte.

At its core are two pairs of attributes Guardians and Pioneers, and Integrators and Drivers:

Pioneers value possibilities, and they spark energy and imagination on their teams. They believe risks are worth taking and that it’s fine to go with your gut. Their focus is big-picture. They’re drawn to bold new ideas and creative approaches.

Guardians value stability, and they bring order and rigor. They’re pragmatic, and they hesitate to embrace risk. Data and facts are baseline requirements for them, and details matter. Guardians think it makes sense to learn from the past.

Drivers value challenge and generate momentum. Getting results and winning count most. Drivers tend to view issues as black-and-white and tackle problems head on, armed with logic and data.

Integrators value connection and draw teams together. Relationships and responsibility to the group are paramount. Integrators tend to believe that most things are relative. They’re diplomatic and focused on gaining consensus.

The following might be riddled with all sorts my personal biases, but run with it for a moment: “traditional” IT has been primarily the domain of Guardians and Drivers; technology management in the future needs to become better at fostering the skills of Pioneers and Integrators alongside the Guardians and Drivers.

First off, let’s think about the current state. IT management discipline still is about a dichotomous split between projects and service delivery; “change management” in IT is still predominantly an exercise in the rationing of changes and the maintenance of the status quo. There is a necessary and healthy tension between the two sides. You wouldn’t, however, probably describe that tension as “creative”.

Project people are primarily Drivers. Service Delivery people Guardians. But both types of folk exist on both sides of the divide.

Traditional IT project people, however, aren’t Pioneers; the ideas generally have come from outside of the organisation, not within. They are a service function whose role is to deliver projects. On neither side are there a large proportion of Integrators. “People people” don’t tend to hang around many technology departments even though IT leaders will increasingly acknowledge that the challenge in delivering outcomes rather than projects lies with changing people and behaviours, not technology. 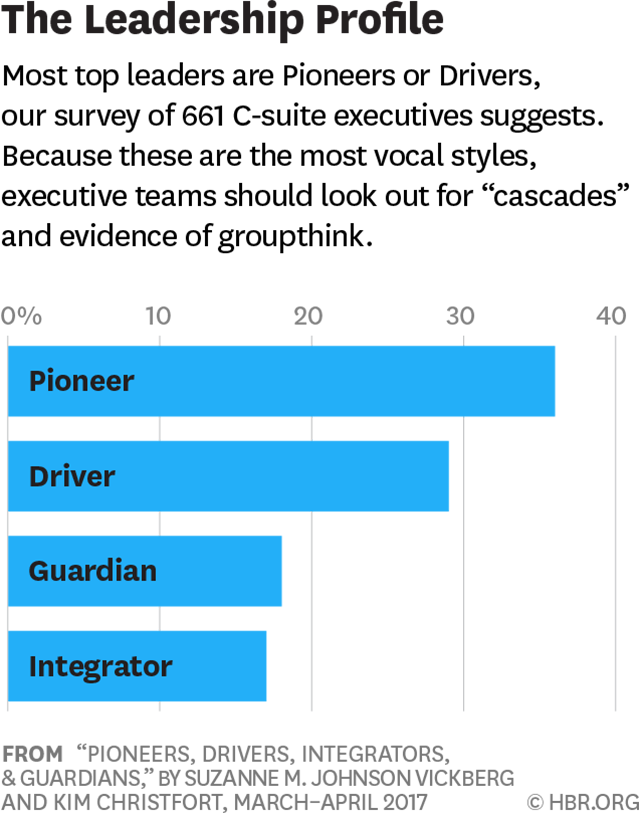 (As an aside, it’s also important to note that “people people” don’t tend to hang around the boardroom much either. According to the Deloitte research, most leaders are Pioneers or Drivers. If you were looking for a reason why organisations can sometimes appear to be such de-humanized places…)

Moving forward, the breadth of activities within the management of technology is changing. Pioneers will be required to help shape the opportunities that will emerge from the use of new technologies; at some point we will need to start becoming more people-focused if we really want the business outcomes to be delivered as well as the projects

Mixing styles doesn’t come easily. Diversity of approach and diversity of thinking increases the innovative ability of teams, and improves a team’s ability to make decisions. But diverse teams are much harder to manage; conflicting styles and approaches leads to more conflict – if you want the management easy life, foster a mono-culture (well, easy until the group think destroys everything…)

The HBR article starts to articulate a few ways in which such challenges can be overcome, including the somewhat counter-intuitive advice to bring the opposites (Pioneers/Guardians; Drivers/Integrators) more closely together. But overall, understanding the capability mix within existing teams, and thinking about how any gaps can be overcome is probably as good a starting point as any.

2 thoughts on “Shifting the balance”