The True Church of Information Technology holds a few articles of faith. One of the most enduring is that belief in the One True System. This monotheistic doctrine is one born of a time when computing power was scarce and the search for “one version of the truth” was the holy journey.

Right, let’s stop that before I really upset someone.

The thing is, though, there are a lot of people in IT who do seem to believe that there is a need to have “one system” in a particular functional area, and none more so than in the realm of collaborative technologies. But the drive for “one ERP” or “one CRM” in previous periods of technology history came about when there was hard cash to be invested into capital assets, and the entry cost for any Enterprise IT system was high.

These days, of course, the cash cost of entry to any new system is often zero, and there are examples of consumer technology being used to great effect within organisations where the actual cost remains zero. There are other governance and regulation factors that obviously come into play, but here are five reasons why a single organisational collaboration platform might not be such a good idea…

1. Collaboration needs to happen in context

If you regard collaborative technologies as social spaces, rather than technology systems, it soon becomes clear that people work together in the places in which they work. Watercooler moments don’t happen in the Watercooler department, located in an office at the other end of town.

So it should be with looser-formed collaborative functions. Yes, you could consolidate all of your discussion groups into a single discussion groups platform, but if your CRM system is offering the same functionality in the context of where your sales people spend their on-screen time, the discussions are much more likely to happen there.

A common claim for the need for a single collaboration platform is that it will extend out individuals’ networks within the organisation. That doesn’t necessarily match with the experience that most people have of social networks outside of work – most people mostly use social networks to stay in touch with people that they already know.

Whilst there are a number of enterprise services that specialised in the realm of people discovery, most of the common-or-garden collaboration, productivity or Enterprise Social services aren’t actually that good at it – they need to be a bit more Tinder and a little less Facebook.

3. Switching systems can help with thinking about switching modes

At any given time we find ourselves working in different types of collaborative team – project teams, service delivery teams and so on. 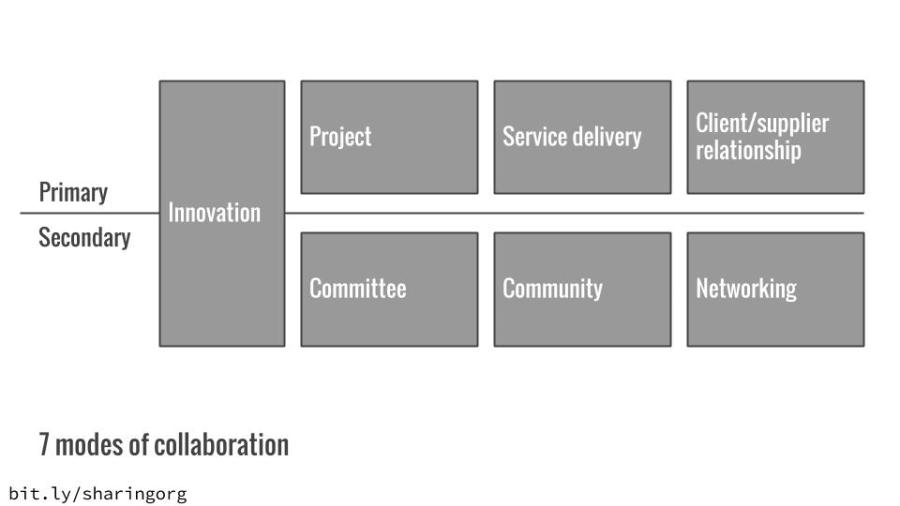 Those different team types have different collaborative needs, and although core functionality (say, discussion groups) might be the same, having those different modes represented in physically different systems might actually help people switch modes more effectively – in the same way that many people use LinkedIn for work and Facebook for “not work”.

4. You are living in a multi-platform world anyway

Whether it’s the consumer services that many staff already rely upon to get work done, the platforms that exist already across an organisation, the fact that the extensible platforms of Excel and email are already providing infinite shadow systems within most organisations, or the systems that clients and partners insist that we use to interoperate with them – multi-platform collaboration is the reality and that’s not going to change.

Single platform approaches ignore the practical reality of the world around them.

5. The costs will probably outweigh any benefits

The history of success of IT projects to consolidate multiple systems into one is, at best, patchy. The recent IEEE Spectrum report into a decade of IT failures devoted an entire special section to challenge. From an user perspective, consolidation doesn’t necessarily make much sense (I’m sorry, but I just don’t buy “too many systems confuses users” any more).

In my conversations with people in the past two months as part of #sharingorg has only unearthed one good example of where a single collaboration platform made sense: a global bank, where many of their core line of business systems were bespoke applications. In that instance, having a common component service that could be used to deliver similar functionality into multiple apps has advantage from a IT and software management perspective.

But most organisations these days aren’t like banks (and you sure as heck wouldn’t want the cost base that most banks sustain to manage their bespoke legacy). We use purchased products. Those purchased products increasingly included less-structured collaborative functionality that sits around the process and relational data. This is, as Salesforce acknowledge in their branding, mere chatter. It’s important, it’s contextual. It’s also temporal and quite probably of very little great value after the event.

We have entered a world where because something is data, it’s seen as having some deep value. That’s often to be seen as part of the business case for system consolidation – a mealy-mouthed excuse for a business benefit like the vague “productivity gains” of old. Just because social interactions generate data, doesn’t mean that that data is “knowledge” or “insight” or will ever be anything other than mere data – the lowest rung on the ladder of bits and bytes.

Consolidation of, or attempts to create single platforms for collaboration within organizations run the very real risk of stopping the collaborative activity from happening in the first place, often in the name of the mythical value of the data that they will generate…

You can keep abreast of the progress of the #sharingorg research project in the work in progress document at http://bit.ly/sharingorg

Comments and contributions most welcomed.