The innovative power of combination 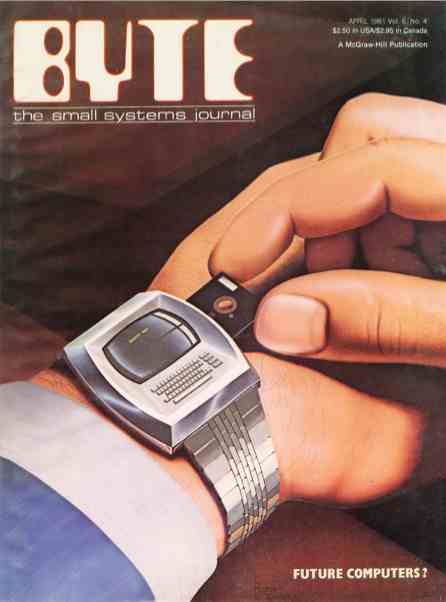 There’s been an image of an early 1980s Byte Magazine cover that’s been doing the rounds on Twitter aligned to a story by Harry McCracken on Time’s website about the trouble with futurology.

It’s all been irking me, and I’m trying to work out why.

The first reason it irks me is that lots of the tweeting sends to be missing the point. Byte’s covers were allegorical stories painted by Robert Tinney in a style so favoured at the time. They were metaphors, yet there seems to be an air of “look how silly those people on the past were thinking that wearables would have teeny tiny floppy disk drives and unusable keyboards”. It’s so easy to be smug in hindsight, as I was only yesterday.

McCracken’s article doesn’t miss the metaphorical nature of the artwork. However he argues that…

… most of all, the Tinney watch is a wonderful visual explanation of why human beings–most of us, anyhow–aren’t very good at predicting the future of technology. We tend to think that new products will be a lot like the ones we know. We shoehorn existing concepts where they don’t belong. Oftentimes, we don’t dream big enough.

(One classic example: When it became clear that Apple was working on an “iPhone,” almost all the speculation involved something that was either a lot like an iPod, or a lot like other phones of the time. As far as I know, nobody expected anything remotely like the epoch-shifting device Apple released.)

Let’s deal with the second part first. The iPhone wasn’t such a big leap- it was an HP Jornada with telephone capability which used a finger instead of a stylus. I’m not saying it’s not a great product, just that it was (like most things) a repackaging and recombination of ideas that had come before. All wrapped up in a design language from the 1920s.

But, moreover, innovation is about new things that are a lot like the ones we know. Look at early cars. Look at the fact that, despite their touchscreens, smartphones still have qwerty keyboards.

Thirty years after the Byte cover we have devices coming to market that look a bit like it. Just as how 35 years after Alan Kaye came up with the Dynabook concept we had Amazon Kindle. The future generally looks a lot more like the present than futurologists would like us to believe. Most of us still aren’t wearing silver suits.