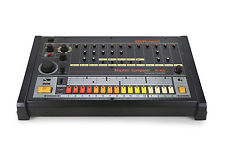 My 808th blog post (how did that happen?) seems a fitting time to pay tribute to the finest piece of hardware that I have ever owned: the Roland TR-808 Rhythm Machine.

Back in my teenage years, I got really into the world of electronic music. Hip hop was my genre of choice for much of the 1980s, and music technology gave me the opportunity to make music in ways that I just couldn’t do otherwise. I’d learned to play saxophone from the age of 12, and whilst I love the sax, it’s not great for much more than soloing – the bits from Gerry Rafferty’s Baker Street, Duran Duran’s Rio and so on (neither of which really made it in the Hip Hop skool of fame)…

My first electronic music purchase was a Casio CZ-101 – a mini keyboard that was a proper synth, even if it looked a bit like a kid’s toy. I then got a digital drum machine – a Roland TR-505 – which was great as it went, but was a bit sterile in sound. Eventually, by trading my CZ, I was able to part exchange it for one of the legends: the 808.

Originally developed as a tool for musicians to work with I guess primarily when rehearsing, the 808 was a solid bit of kit. Whilst it had microprocessor controls for managing the way in which you recorded drum patterns, all of the sounds were created with analogue synthesis. Some of them were realistic – well, one of them. The Handclap. The rest of it sounded nothing like the real world. And that is why it had real charm.

The kick drum could be anything from a tiny blip to a thunderous boom. The snare tinny and snappy. The toms and congos were like a disco explosion. And the cowbell sung beautifully (until totally overused by those evil overlords, Stock, Aitken and Waterman on songs like Mel & Kim’s Showing Out).

The user interface was a clash of 80s garishnous. Reds, oranges and yellows, red LEDs blinking all over the place. And it had the overwhelming feel of a cash register. But it was a heavy, physical, tactile beast that felt right in what it was designed to be doing – producing beats.

As I approached my late teens, a need for cash meant that I had to sell the 808. For about £350 as far as I can remember (big money for a teenager in the late 80s). I’ve missed it ever since.

These days, in rare moments I get to make music, everything is in software; Propellerhead’s Reason, and increasingly the browser based http://www.audiotool.com/ On the latter you can, for free, play around with a fairly accurate simulation of an 808. It misses the physicality of the original, but at a couple of thousand pounds on EBay these days, it’s probably the closest I’ll ever get to one again.

You can also see a demo of the 808 in the video below: