a generation of being digital, Other Stuff, Technology 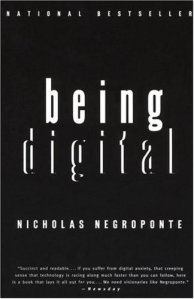 One of the things that has been most striking in re-reading Negroponte’s being digital is the belief that he had two decades ago that the rise of digital channels would lead to new, multi-media content forms.

The book was written at the height of the CD-ROM multimedia craze, when Encarta was going to supersede Britannica and “new media” was going to triumph over old. Looking at the landscape today, it’s surprising on the face of it how little digital distribution has impacted on the types of content that we consume even if it is having an impact on how we consume it.

Take, for example, newspapers. The physical distribution on newsprint is in undoubted decline, but fundamental format of news has changed little – in fact the introduction of colour photography and infographics with changes in printing technology with titles like Today in the 1980s could be argued to have had as much impact on the format of news as the move to the Web and apps (Infographics predated Twitter, dontcha know).

Take, for example, television. The ways in which we consume TV are changing. It’s becoming timeshifted, and increasingly on devices other than a television although recent reports show for example that the BBC’s iPlayer accounts for around 2% of hours viewed at about 12% of the distribution costs. But a TV programme still is a linear block of content with identifiable beginning, middle and end. Which isn’t all that surprising given that that is how a story works. Non-linear story-telling is an acquired taste a bit like free jazz.

Sure, we’ve seen new formats arise (the SMS message, precursor to the Tweet, for example). And we’ve seen a shake out in older formats where new digital formats just make more sense (goodbye Yellow Pages, the aforementioned Britannica…). But a pop song is still a pop song, a novel is still a novel, and a newspaper still a newspaper even if the distribution model has changed.

Today, multimedia is a desktop or living room experience, because the apparatus is so clunky. Even laptops, with their clamshell design, do not lend themselves to being very personal information appliances. This will change dramatically with small, bright, thin, flexible high-resolution displays. Multimedia will become more book-like, something with which you can curl up in bed and either have a conversation or be told a story. Multimedia will someday be as subtle and rich as the feel of paper and the smell of leather.

The first part of that is remarkably prescient. Hello tablets!

But the latter part… well, maybe it’s just taking longer than Negroponte expected. But rather than multi-media being a new form of content as sensual as old media formats, what we have today is digital devices that provide improved functionality to established formats.

Spotify or iTunes or Kindle provide the content, provide additional functions and features, but I’m not sure yet have achieved the subtlety of form that Negroponte expected. For example, typesetting in Kindle is a particular bug-bear of mine, esp- ecially when you get words hyphenated in the middle of the page as a vestige of the paper process.

It takes a long time to establish new forms of art. And there’s also a huge sunk investment made by media companies in the old formats which they rightly need to keep as valuable as possible for as long as possible. As a result it strikes me we are in a world of digital distribution of multiple media formats that were predominantly of the analogue age.