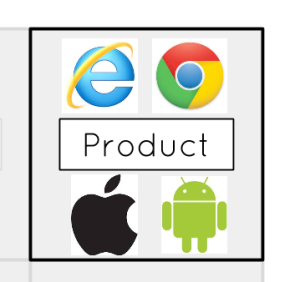 Continuing the tour around the quadrants, we come to the external-facing, core product-related activities that a business conducts. This is the area in which there has probably been the greatest change in the past decade as a result of digital technologies – first with the Web, and latterly with smartphones, tablets and the world of Apps.

If you spoke about interaction between customers and suppliers ten years ago, you were only just seeing the Web becoming a mainstream route to deliver services and products. Online shopping was common, although on a business-to-business level things were still remarkably paper-based. Wind forward to today, and increasingly we not only purchase, transact, and give and receive support digitally, often entire products have moved purely into the digital realm.

Take, for example, recruitment. As recently as 2006 I applied for (and got) a job at Reuters through an advert placed in The Sunday Times. These days I can’t think of a single print publication where I would find roles like that one. The industry, with people at its core, has become almost entirely digital in terms of how it is delivered.

We shop for groceries online or in apps. Christmas shopping, the annual consumer binge of spending, moves increasingly online (John Lewis saw a 23% increase in online activity this year). We bank online or in apps…

… and the banking services appear to be an area where a disconnect between activities in this quadrant, and the one to its left, can cause real problems. Recent problems in services provided to customers by the RBS Group in part stem from investing heavily in customer-facing technology whilst leaving the internal processing systems on decades-old platforms (see more on that here).

Similarly, you can find when analysing in this kind of way where there is fragmentation of services provided to customers that reflects the ways in which an organisation is structured internally.

Take, for example, Amazon’s Kindle service. It’s a great service – and I’ve spent far too much money in the past few years because it’s so easy to. However, the Kindle book-reading service and the Amazon shopping for stuff service are very disconnected; if you want to buy a book from the Kindle app, it basically jumps out into the pretty-much bog standard Amazon online shop. It’s fine (as I say, I’ve spent enough) – but it leads to missed opportunities; for example, there is no way in which you can jump from a book referenced in another to buy it other than by copying and pasting the details. Which seems a bit primitive.

The realm of Product services is the one where it is most likely that companies are going to invest money to build their own bespoke software. That has inherent risk – put too much effort into building something and you might find you’ve created an albatross that makes you uncompetitive as others eventually catch up. An example here, possibly, is the world of London taxis and minicabs. Traditionally these build or buy decisions have been ones left to IT – but as both RBS and the taxi firms show, they are intrinsically business, not technology decisions, and need a collaborative approach to resolving.

Next – the Communications quadrant.